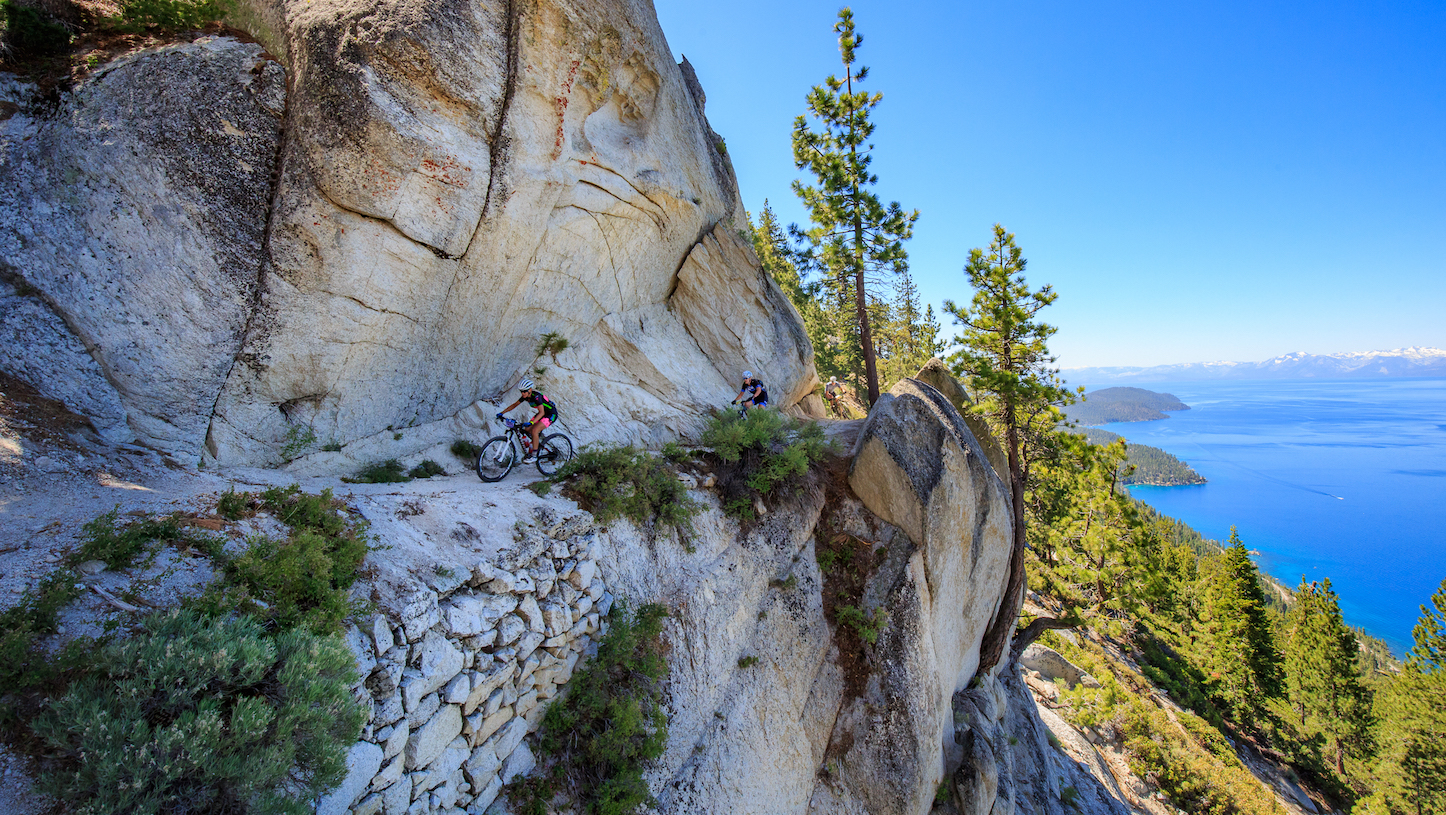 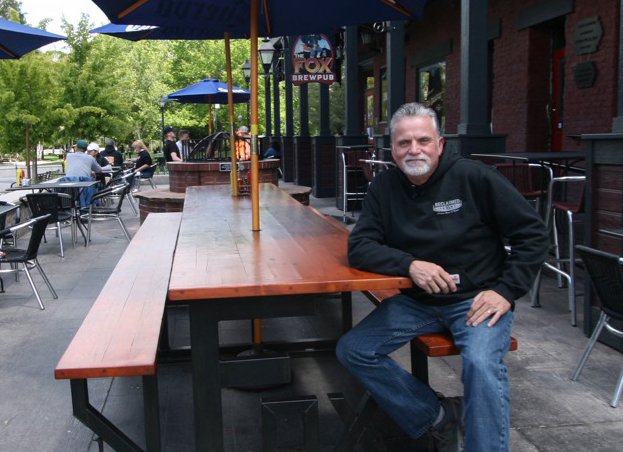 Joel Dunn sits on his latest handmade creation, over-sized benches made from reclaimed steel and locally sourced wood from the 1920’s, located outside of the Firkin and Fox.

The Fourth Annual Carson City Off-Road is dedicated to Carson City native and visionary trails community leader, Joel Dunn. Born and raised in Carson City, Dunn has not only witnessed the evolution of Nevada’s state capital, but has also been a driving force in its transition into a recreation-focused community.

Joel started his journey at the ripe age of 14, dragging baseball fields for Carson City Parks and Recreation. After a short stint with Nevada Tourism, Joel worked in marketing for Western Nevada College for more than a decade before coming back to Parks and Recreation where he spent the better part of 17 years developing group events – particularly softball tournaments – that brought thousands of people from around the country to Carson City.

Dunn and his wife Sheri consider themselves a softball family, with a daughter who competed at the national level and Dunn himself a coach for three national championship teams. But Dunn realized that sports tournaments aren’t enough to sustain Carson City tourism economically.

The catalyst for change came in 2013, when the Wall Street Journal published an article stating that Carson City was one of the least likely communities to recover from the recession. When the Carson City Board of Supervisors saw this article, it set off a recreation movement changing the future of Carson City for the better, and Dunn has played an instrumental part.

But the big question is, when it comes to rebranding a community to attract a younger generation of residents and visitors, why make trails the focus?

“While working for Parks and Recreation, I was aware Carson City acquired a significant amount of open space through a tax measure the city had adopted,” said Dunn. “I sat down with the open space advisory board and Juan Guzman to develop a plan around trails and recreation.”

Dunn saw the impact mountain biking had on other American West communities like Prescott, Moab, Sedona and Park City, and thought it might work for Carson City as well. Carson had the land and the trails, now they just needed the people and a way to bring them in. In 2013, Dunn became Executive Director of the Carson City Visitor’s Bureau (now known as the Culture and Tourism Authority) and began efforts around rebranding Carson City as an outdoor recreation destination. Dunn didn’t waste any time, and within two years attracted Epic Rides and the Carson City Off-Road, putting the community in the national spotlight for mountain biking.

“Bringing Todd Sadow and the Epic Rides crew to Carson City was the showcase we needed to solidify our town as a recreation-focused community,” said Dunn. “But for us it’s not as much about the event as it is about driving the culture change in our community. Who are the next 15,000 people moving to Carson City going to be? We want those who value and appreciate outdoor recreation.”

Since 2013, thanks to efforts around outdoor recreation, trails and well executed social media marketing, Dunn and his team at the Carson City Culture and Tourism Authority (CTA) have largely driven the generational shift that’s happening in the community. Not only are more families moving to Carson City, but transient occupancy tax revenue from hotels has doubled since 2013 from $1.2 million to $2.4 million. And since the redevelopment of Carson City’s downtown in 2016, vacant storefronts have dropped from 19 to only two on West Carson Street. But what Dunn is most proud about is what the CTA has been able to give back to the community financially.

“Since our rebranding in 2013, the CTA has been able to give $80,000 to our local trails organization, Muscle Powered, to use for environmental studies in building new trails,” said Dunn.

After retiring from the CTA in 2017, Dunn is still busy leaving his mark on the community in the form of a custom furniture business – Reclaimed NV – made from reclaimed steel and wood. His latest handmade creations are two massive outdoor benches at the Firkin and Fox that thousands of visitors will gather around after an amazing day out on the trails – trails that he helped create – bringing Dunn’s impact on the community full circle.

The 3rd Annual Carson City Off-Road is dedicated to Maurice Tierney, publisher of Rotating Mass Me 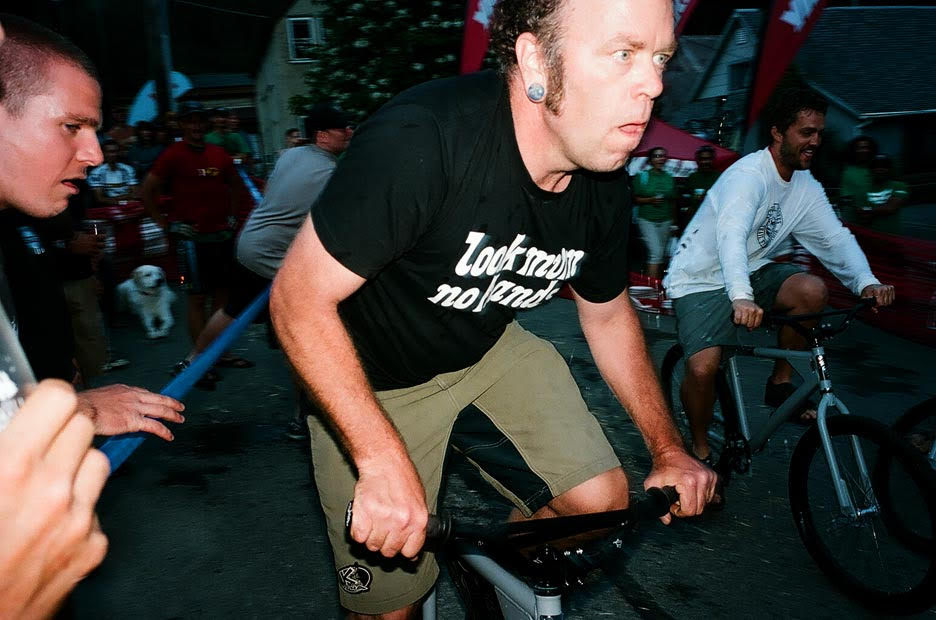 dia, the parent organization of Dirt Rag Magazine and Bicycle Times. Spanning a publishing career approaching 30 years, when it comes to print media in the mountain bike industry, Maurice has seen it all. What started back in the late 1980s as a little magazine dedicated to the local mountain bike scene around Pittsburgh, Pennsylvania has evolved over the years as a mainstay ‘zine for core mountain bikers and those who love a grassroots, community-focused mountain bike publication.

Mountain bikers who’ve been around since the 1980s immediately recognize the name, Max Jones. 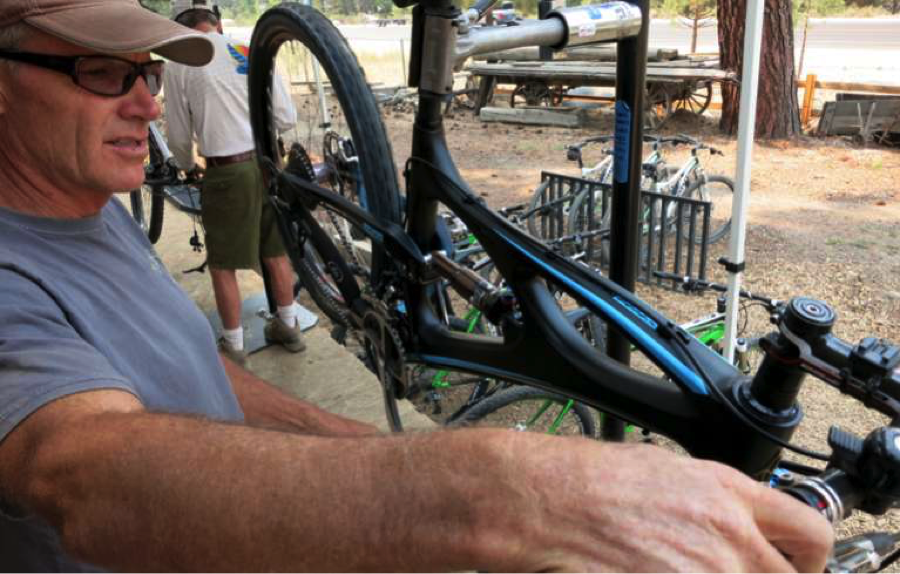 As one of the very first professional mountain bike racers with many podium appearances between 1984 and 1996, Jones was inducted into the Mountain Bike Hall of Fame in 1998. But bigger than his racing achievements, Jones is a long-time Carson City resident known as the man who resurrected one of the world’s most iconic trails, the Flume Trail. A trail that has attracted people from around the world thanks to its absolutely stunning views perched 1,500 vertical feet above Lake Tahoe.

CCOR is Dedicated to…

…none other than the “Founding Father of Mountain Bikes” himself, Gary Fisher…A visionary with a true sense of style. Since joining Trek Bicycles more than 20 years ago, Gary has shifted his focus from mountain bike innovations to a much bigger vision of making the bike an essential part of everyday life in America.