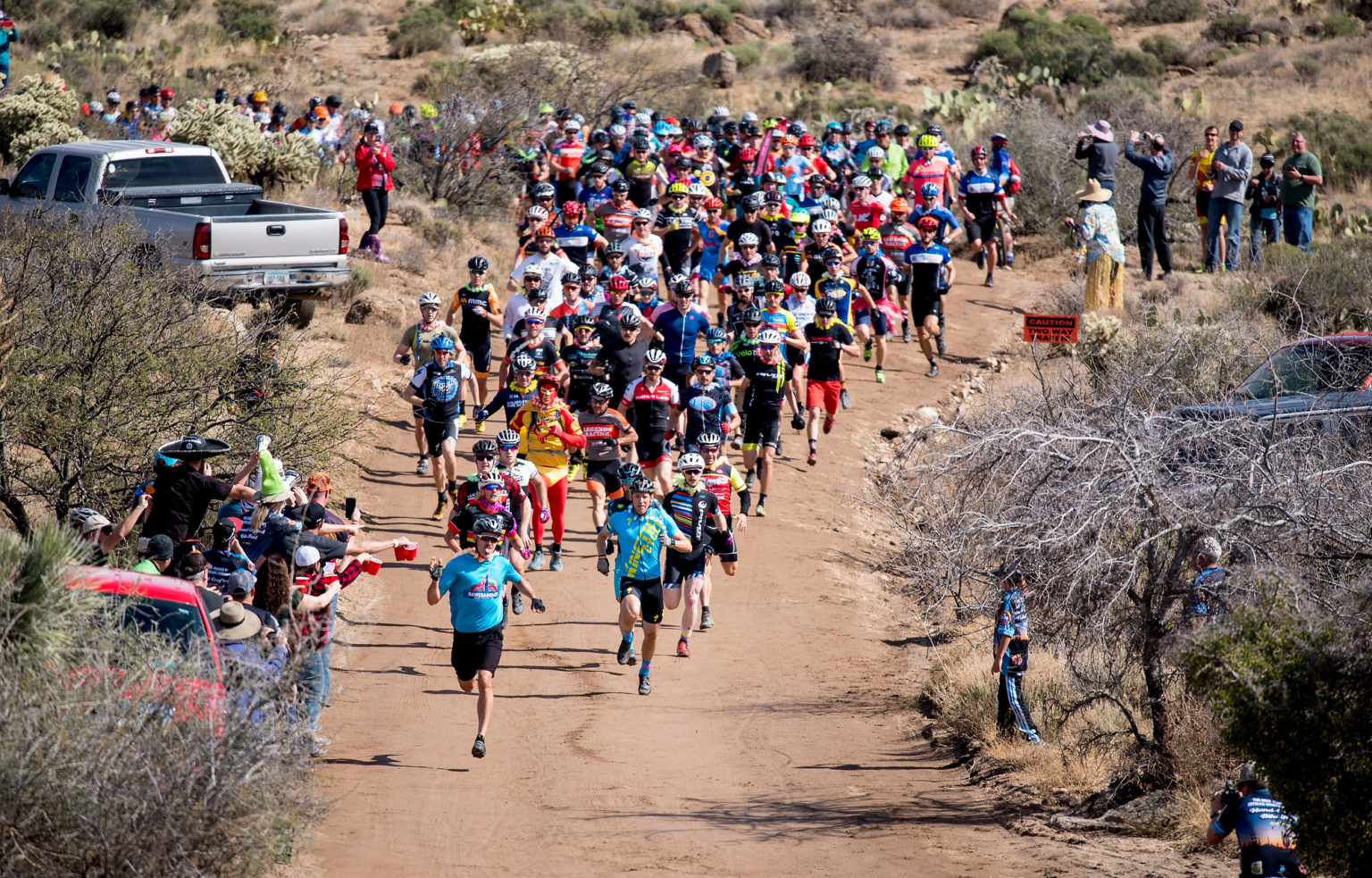 The “24 Hours in the Old Pueblo” is a team relay and solo rider mountain bike event.

The race begins at 12:00 PM on Saturday and ends 24 long grueling hours later at 12:00 PM Sunday. Both team and solo riders will compete for prizes.

This race will include these categories:

Five-person teams are coed and must include at least one rider of each gender represented. In addition, five-person teams will have five separate age categories that can be determined by adding up all the ages of all five riders. These categories include combined ages 0-149, 150-200, 200-249 and 250+. The corporate team category consists of six to ten riders with no male/female restrictions. Corporate teams need not necessarily have sponsorship. All registered team riders in the corporate category must complete at least one lap.

Minimum Age Requirement: Epic Rides has no minimum age per se. We do have a minimum lap time. We do this to assure a safe environment on the course for all participants (same reason we limit the solo field).

The course will consist of a 16-mile loop including eight or more miles of single track. The trails for this course have been designed specifically for 24-hour desert racing. Bring tweezers and a comb.

The race will have a Lemans style start and utilize a baton handoff between completions of laps. Each team captain must verify that each team members name has been registered on the log in / log out sheet by 11:30 am on Saturday. Riders will be assigned a number plate which must be attached to the bike any time a rider is in the transition area or on the course. Defacing of number plates is not allowed. Decorating team baton is encouraged.

Start time for the race will be at 12:00 pm on Saturday. The race will utilize a Lemans style starting procedure. The Lemans style start is preferred, because it ensures a safe and exciting method for starting a large number of riders. It consists of having all the riders line up at the starting line, at which time a pistol is fired. The riders will then run a designated 400-yard course (approx.) to the bike racks to pick-up their bikes. The racers will then continue onto the race course. All starting riders must have their bikes pre-positioned in the bike racks and be logged-in prior to the start of the race. All riders on deck; those riders who are waiting for their teammate to complete a lap, must be logged into the manual timing sheet no later than 15 minutes prior to their teammate’s completion of the lap.

Racers entering the course after 5:30 PM and before 6:30 AM must have their light mounted and be able to demonstrate that they are properly functioning. Riders must have their lights burning between 6:00 PM and 6:30 AM. Riding with lights off between these times in an effort to conserve energy is dangerous and will not be permitted. Any team found riding with their lights off, can be disqualified. Riders may turn off and remove their lights after 6:30 AM. All lights on/lights off times are subject to change depending on weather conditions. Announcements of the exact times will be made during the race. Please remember to turn off lights when entering the Exchange Tent and approaching volunteers.

Each racer (including soloists) must log in and log out at the check-in station located at the start/finish area (exchange tent). A team baton will be used and must be passed from the rider completing a lap to the registrar. The registrar will then record the login time and the baton will be passed to the rider logging out before that rider can begin his/her lap. Once the baton has been handed to the registrar, the rider has officially logged out. The logout time is the login time for the next rider regardless of whether or not that rider is present to receive the baton. If the rider is to continue on for another lap he or she must still hand over the baton to the registrar and have it handed back prior to beginning the next lap. If a rider fails to do this, only one lap will be recorded. Any team who lost their baton will receive a five-minute penalty. If a team cancels a rider’s lap and is starting the lap over with a new rider, a new baton will be issued without a penalty. However, the team’s original baton must be returned to the registrar. The login time recorded for the rider failing to complete the lap will be used as the login time for the new rider. Teams should be sure that each rider is logging in and out correctly.

A rider who has entered the course must complete his or her lap. Rider substitutions can only be made at the check-in station. In the event that a female rider on a five-person team with only one female rider should have to withdraw from the race due to injury or illness, she must have completed two laps in order for that team to qualify. Should a team in another category lose a teammate for the entire race to an injury of illness that team may continue to compete.

If a rider logs off the course prior to 12:00 PM and no other rider logs in to complete a final lap, that team will be considered a “DID NOT FINISH“.

The ending time for the race is 12:00 PM on Sunday. Any racer still on the course after 12:00 PM will log off after completing the lap. The final finishing places are to be determined by the total number of laps completed and the order in which each team completed the final lap.